If you’re a local in Miami who needs a laugh, I perform live virtual stand up comedy everyday at 6PM. This event is FREE to attend.

Need a daily pick me up?

Join me as I bring together the Miami Comedy community to have a funny conversation about anything you want.

You can look forward to having a great time everyday as we present to you a virtual stand up comedy show.

This is an extraordinary comedy show where YOU are the guest!

Because YOU decide what the topic of the conversation is by typing anything on the chat during the livestream.

Need to get something off your chest? This show is where we can laugh it all away.

This event is also where you can make friends with other locals who love to laugh in Miami!

This event is free, no ticket costs to become a part of the Miami Comedy community. 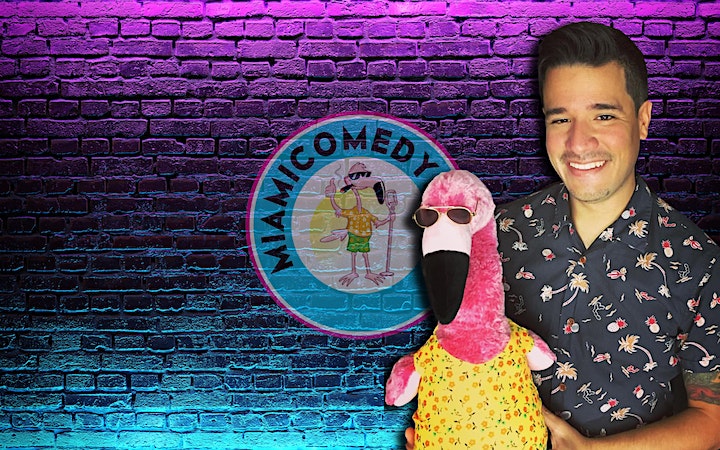 Manny Garavito (me) is a local Miami comedian.

Before deciding to hit the stage for the first time, he worked a comfortable salary job as a banker.

As a means to escape the corporate life and get in touch with his creative side, Manny began performing stand up comedy in 2009.

After quitting his career to pursue stand up comedy full time, Manny realized there was no ongoing shows in Miami to perform regularly.

Or a place for comedy fans like you to go out and enjoy the art of live stand up comedy entertainment while having a drink with friends.

So in 2014, he started MiamiComedy.com and became the #1 virtual comedy club of Miami.

He organized an online platform for the real local comedy fans (those who like to see how stand up comedy is done at a local level) to go see comedy shows nightly, and a place for local comedians to perform 7 night a week.

After the ongoing success of Miami Comedy, he was featured on the Amazon Prime documentary Respect the Light.

Now you can become a part of our new virtual pre-show to our nightly events!

See our article on the Miami New Times: https://miamicomedy.com/miami-new-times

Our second article on the Miami New Times: https://www.miaminewtimes.com/arts/miami-comedians-reach-out-via-online-stand-up-and-podcasts-11622371

MiamiComedy.com has produced independent comedy events for years. Often imitated, but never duplicated. We are the original Miami Comedy production company finding authentic performers, original comedy styles and curating entertaining live shows for people who love to laugh it up and enjoy the true art of stand up comedy in Miami. As seen on Amazon Prime Video “Respect the Light” the Miami New Times, Culture Crusaders, the Miami Improv, Calle Ocho News and UNATION. We do pop up shows all over the Magic City, in all your favorite bars, restaurants, lounges and theaters! We make each experience unique with its own environment, drinking and dining menus! And now virtually on ZOOM!

Want to laugh with audiences all around the nation?

See what stand up comedy is like in other cities. Place your phone and email below and we'll text you the Laugh Lounge App.